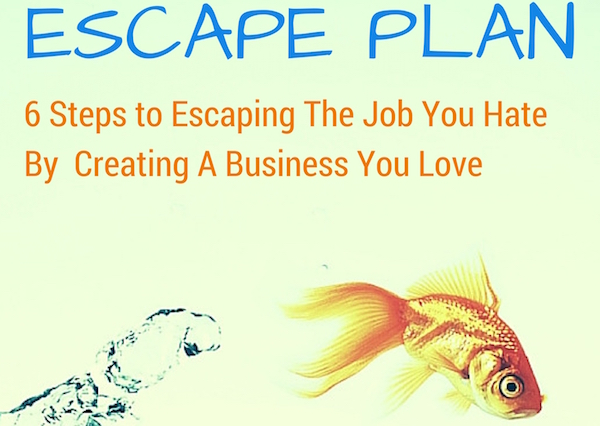 ESCAPE the Tyranny of the Job Market

We are the midst of a revolution.

Our society is going through a seismic shift.  The shift is as big (if not bigger) that the shift that happened during the industrial revolution.  Before the industrial revolution, people lived in smaller towns, they had their own tools, grew their own food, generally traded their special skills for things that they needed but couldn’t make themselves.  There were two classes. The nobility and pretty much everyone else.   The industrial revolution changed lives.  Tools and factories allowed people to find work that paid well.  There was an alternative to working on the farm.  Unions and social guarantees curbed the early abuses – and the middle class was born.

People could get a job that provided for them for their entire lives.  You couldn’t work from home because the assembly line wasn’t there.  You needed the tools the company provided you to get your work done.

Technology has changed everything.  It is now easier than ever to communicate instantly with anyone around the world.  You can buy a laptop for less than $300 and have everything you need to reach potential customers everywhere.  And, there are plenty of people from which to find an audience for almost anything you want to teach or sell.  The opportunities have never been greater.

But the flip side is that technology and globalization have made it easier for companies to shop for labor all over the world (which drives down wages for workers from first world countries) and also to monitor and control your every movement.  Companies can now extract maximum value out of each of your working hours.  Pay and conditions are getting worse for people with traditional manufacturing jobs — and I think the downward trend will continue.

My friend Jeff is an economist.  He was 50 years old when he lost his job.  He struggled for years before finally finding some part time work at a book store.  He still looking for a full time position.  He has noticed how over the course of the five years he has been at the bookstore, his work has been increasingly controlled by the computers.  When I asked him why he didn’t start his own business (he is fluent in French and Arabic), he replied that he had no idea where to start.

Another friend, Annie, had almost finished her Masters degree in teaching and special education when she had her first child.  She made the choice to stay at home with her kids until the first born child was well into college, and the last one was in high school.  She home-schooled one of her children because of a learning disability, and through her experience with her son, learned to be a fierce advocate for smart kids who learn differently.  When her last child was in high school, she wanted to go back to work to help pay for her children’s college education.  The only jobs available to her were educational assistant jobs that paid just over $10 an hour.  She was a signature away from teacher certification, but her supervisor refused to sign because it would it mean that he would have to raise her salary.  And, although Annie got a lot of satisfaction from the work she did, she was not working in her passion of helping smart kids who learn differently succeed in college.   When I talked with Annie, it became clear to me that she had a lot to offer parents and kids who needed a fierce advocate.  She just needed the first steps outlined for her in order to be confident enough to turn that into a business.

Julie worked her way through college as a package delivery person for a large shipping company.  When she was first hired there were vague promises of a managerial job once she had graduated.  She graduated – tens of thousands of dollars in debt – but there was no job. Instead, there was an offer for her to “buy” a contract position with the company.  Although her work hours, uniform, and working practices were dictated by the company she worked for, she was considered an independent contractor.  She was responsible for using her own car for deliveries (paying to fix the car if anything went wrong), she had no paid sick leave or vacation time.  And her pay rate was not that much more than she had made as an “intern”.  Julie’s truck broke down – she didn’t have money to fix it and she had to give up the route she had “paid” for the privilege of servicing.  In her spare time, Julie made amazing jewelry.  She didn’t have time to work on her art because she was driving to meet delivery deadlines.  Losing her route was almost a blessing to her, because now she had the time to start the business she had always wanted to start.

This book is written for people like Annie, Jeff and Julie – who are victims of the economy, or who suddenly find themselves looking for meaningful work in a landscape that has completely changed.  Do their stories sound familiar?  Then, this book is for you.

Jasper and I believe that there is still time to land on the right side of this divide.  We started the Paycheck to Passion podcast to help tell the stories of those who have created businesses from their passions in order to inspire people who still haven’t taken that first step.  We’ve interviewed nearly a hundred entrepreneurs,  and although each story is unique, they all have  common threads running through them.  Those threads form the weave that makes  passion-based businesses work.  By reading this book, and applying what you learn here, you can save yourself months (or even years) of trial and error, by discovering the pitfalls in advance and implementing tried and tested strategies that work.

What to expect from this book.

The chapters in this book contain your E.S.C.A.P.E  plan – escaping from work that is unfulfilling, or an economy that gives you no opportunity to be creative or to succeed on your terms – a step by step system for creating a passion-based business that works for you.  Each chapter contains a story from one of our podcast guests, some practical action steps and tips from people who’ve been there, done that, and have not only got the tee-shirt, but are probably selling their own.

Like to discuss your business idea to understand what would be involved? Schedule a Clarity Call with me by clicking the following link – Schedule

About the Author Jasper Blake

The Importance of the Case Study